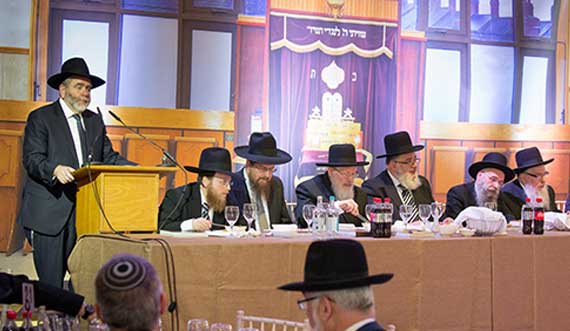 The Gateshead Yeshivah European Gala Dinner that was held on Sunday 31 January was an outstanding success and surpassed the expectations of the dedicated askanim who had spent months preparing all the fine details.

A huge crowd of close to a thousand people converged on the premier venue of the Meridian Grand Hall in North London. The guests included generations of Gateshead Yeshivah talmidim together with parents of present bochurim, ranging from great grandfathers over 90 years old to 20 year old bochurim. In some instances, three and four generations of talmidim were all attending together. They all had the common bond of having learned in the same Yeshivah Beis Hamedrash, stretching over half a century in time.

The purpose of the Reception was to allow the guests to meet and talk with the roshei yeshivah and other members of the hanhallah who were all present. All the guests mingled together with the rabbanim in the Reception that had been provided in the small hall, and meeting once again old Yeshivah friends. A photographic exhibition of old Yeshivah portraits was displayed around the hall and was the source of much nostalgia for many of the guests. They were slowly shepherded into the main hall where the Dinner was to take place.

At 8.15 precisely, the Rosh Yeshivah Harav Avrohom Gurwicz entered the hall, followed in an impressive procession by the members of the Hanhallas HaYeshivah. They were greeted by enthusiastic singing of yamim al yemei melech tosif by a thousand voices, all paying respect to their beloved Rosh Yeshivah.

The Dinner Chairman, Mr Shaul Bodner rose to greet all the revered Rabbanim and guests. He welcomed each person and emphasized that each individual is still indivisibly linked to the Yeshivah. Each person makes his own unique contribution to the continuation of the Yeshivah.

The pleasant and warm atmosphere of the Dinner was strengthened by the old Yeshivah nigunim that were sung by an especially created Yeshivah choir directed by Reb Moshe Yosef Fordsham. The Choir consisted of yungerleit who had learned in the Yeshivah, ranging from twenty years old to men over sixty years old.

Two presentations were made during the course of the Dinner. The first was the Kesser Torah Award given to Rav Shmiel Berger. Harav Yosef Aharon Oppenheimer, on behalf of the hanhala introduced the Award, describing the very special bond that has existed for many years between the Berger family and Gateshead Yeshivah. This legacy was begun by the grandfather Reb Getzel Berger, followed by Rav Sholom Berger, and now Reb Shmiel Berger and his family.

Besides his general munificent and unstinting support of the Yeshivah, Reb Shmiel also has recently donated a sefer torah to the Beis Hamedrash. The Rosh Yeshivah Harav Gurwicz then presented Rav Berger with a set of hand-bound leather Chumashim.

In his reply, Rav Shmiel acknowledged the great zechus that he had been able to be a support for the Torah learning of the Yeshivah. In fact, he represented the fifth generation of his family who had all learned within the Beis Hamedrash walls.

The second presentation was given to the Hosts of the evening, Mr and Mrs Ivor Smith. Harav Oppenheimer introduced Mr Smith who was also a former talmid of the Yeshivah and who had given his magnanimous support to the Yeshivah over many years. The Rosh Yeshivah presented him with a similar leather-bound set of Chumashim. The wives of both the recipients also were given beautifully leather bound Tehillim.

When Mr Smith rose to speak, he was visibly overcome with emotion. He recounted a comment of Harav Chaim Kanievsky made to him, when he asked for the most important tzedaka he should support. Harav Kanievsky replied that the rule ‘talmud torah k’neged kulom’ applies to the mitzvah of supporting talmud torah as well. Mr Smith described his feelings at being given the merit of strengthening the learning of Torah within the Yeshivah that he had once himself learned.

A special audio-visual presentation was screened featuring an especially recorded message from Harav Matisyohu Salomon, former Mashgiach of the Yeshivah and now Mashgiach Beis Medrash Govoha Lakewood. Although suffering from ill-health, the Mashgiach had put considerable effort into conveying his message to the participants at the Dinner. His words were listened to in rapt silence. Harav Matisyohu emphasized his own personal strong feelings of hakoras hatov towards the Yeshivah where he had spent so many years. All the former talmidim should also consider their own debt of gratitude for everything they have received from the Yeshivah.

The proceedings continued with an announcement by Dayan Yonoson Abraham. He informed the guests that a new sefer torah was to be written in honour of the Rosh Yeshivah. The project had been envisaged by a group of former talmidim of the Yeshivah. They hope to make the writing of this new sefer through the joint contributions of many other Yeshivah alumni. Harav Avrohom was then invited to go down to the lower floor underneath and write the first letter in the new sefer torah. The Rosh Yeshivah could be seen performing the mitzvah with an inner fervour and passion. It was further announced that the writing would carried out by Reb Yona Bamberger from Eretz Yisroel and will be completed within eighteen months. The subsequent hachnosas sefer torah will form the central feature of a unique Shabbos Hisachdus that is being planned. The Shabbos event in Gateshead will unite together as many as possible former talmidim of the Yeshivah from its earliest days from England and abroad. The ruach that surrounded the hall at the beginning of this grand project was charged with electrifying emotion. The whole hall broke into spontaneous singing and rekidos in celebration with the Rosh Yeshivah.

The main course of the Dinner was then served. The excellent first-class cuisine served throughout the evening was provided by Reich’s Catering.

The keynote address was given by the Harav Avrohom himself. The Rosh Yeshivah was introduced by Rav Avrohom Pesach Kamionka, Rav Beis Hamedrash Agudas Yisroel. Rav Kamionka is a talmid of the Rosh Yeshivah, and he recognised that it was a great zechus to be counted among the talmidim of one of the foremost gedolei hador. The incisive comments of the Rosh Yeshivah are to be considered truly ‘Torah miSinai’. The entire hall rose together in respectful silence to hear the pearls of wisdom from the Rosh Yeshiva who spoke for forty five minutes. He first thanked all the active members of the Dinner Committee who had brought the evening to fruition, and also those who had been faithful supporters of the Yeshivah. He continued to give divrei chizuk interlaced with divrei torah from gedolei rishonim v’acharonim.

The Rosh Yeshivah explained that there are mishpotim and dinim for the regular person and another set of laws for a Melech. This can be demonstrated from the episode when Dovid Hamelech was asked by the navi to pass judgement on the rich man who stole from the poor man. The Rosh Yeshivah explained that the reason for this difference is because Dayanim who are mere mortals can only judge based on what they see and hear, but Hashem who is the Melech malchei hamelochim knows all other details that formed the end result.

Hakodosh Boruch Hu takes into account that it is not the action alone that is the guilty party – rather it is the bad Midos middos ro’ois that encouraged and goaded a man to sin.

The Rosh Yeshiva concluded by encouraging his listeners to work on their middos tovos to bring out their best qualities. His inspiring words will remain in the hearts of his listeners for a long time.
Each participant received a leather-bound siddur that had been donated by Reb Osher Low in memory of his father Reb Yeshaya Wolf Low z”l. Dayan Abraham launched an appeal for the Yeshivah. On each place was a Standing Order Form for regular contributions to the Yeshivah. Dayan Abraham pointed out that each talmid should feel indebted to his old Yeshivah so that a regular contribution should be part of his normal weekly expenses.

The hall was then darkened as a second video presentation was screened. The presentation showed a wide selection of bochurim who are at present learning in the Yeshivah. The Yeshivah has gained a world-wide reputation and contains bochurim from all four corners of the world. In fact, the Yeshivah prides itself for having created an achdus from the multitude types of boys that have come to learn within the beis hamedrash. Bochurim were interviewed from America, Antwerp, Toronto Gibraltar and many other locations. They recalled their memories of the years they had spent in the Yeshivah. Among the many praises they had to say about the Yeshivah was the “amazing ruach that existed in the Yeshivah” and the accessibility of the members of the Hanhallah for the bochurim.

As the evening was drawing to a close, a Raffle was held. The first prize was a leather-bound Shas which was won by Reb Nuchi Bude. Second prize was won by Reb Mendel Spitzer. Finally, the Rosh Yeshivah was given the honour of bensching, bringing to a close a most memorable event.
Live music was provided by Aharon Eliyohu Bamberger, together with vocal accompaniments by the renowned singer Reb Shmuel Steinmetz and the Neginah Choir. The whole evening brought an achdus and a chizuk for all those who have had the privilege of being part of one of the foremost European mosdos hatorah.