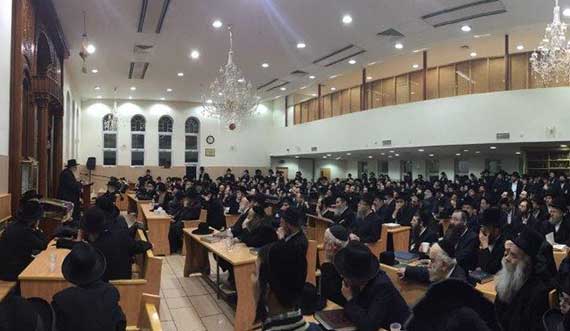 Last weekend, North West London was privileged to host a unique experience of kavod hatorah. A delegation of senior members of the hanhallah of Gateshead Yeshiva graced the vicinity with their presence. Under the title ‘Gateshead Comes to London’, the honoured guests participated in a full programme of shiurim and other activities and coincided with the Gateshead Yeshivah European Gala Dinner.

Very fittingly, the parshas hashovua was Parshas Yisro and participants in the weekend felt the atmosphere of a true kabalos hatorah. The primary objective was to provide the numerous friends and alumni of the Yeshivah across all age groups with an opportunity to maintain and revitalise their connection to the Yeshiva and its Rebbe’im.

The weekend began on Thursday evening, when the Rosh Yeshiva Harav Avrohom Gurwicz gave a Chumash Rashi Shiur in North London. The shiur took place in Viznitz Monsey Beis Hamedrash, Stamford Hill, and demonstrated the high regard in which the Rosh Yeshivah is held. The whole building was filled to absolute capacity with an incredible crowds consisting of hundreds of people. The shiur was attended by Yidden from many different backgrounds and upbringings. Fathers brought their young sons, to enable them to have a glimpse of one of the revered and acclaimed Roshei Yeshivah in our generation. Many men were standing outside in the corridor or watching from the ezras noshim. There was absolute silence for the whole duration of the shiur, and afterwards all the audience filed past to greet the Rosh Yeshivah.

Harav Avrohom Gurwicz began his stay on Friday morning with a visit to Menorah Grammar School where he met and spoke to the boys. The tefillos Shabbos were held at Beis Tefillah on Friday night, Kehillas Ohel Moshe on Shabbos morning, and the Golders Green Beis Hamedrash on Shabbos afternoon. Following mincha, a Shalosh Seudos was held that attracted over 200 members of a Kehillah. Many of the participants had a connection to the Yeshivah spanning many decades. The various droshos and divrei chizuk of the Rosh Yeshivah had a common theme – Limud HaTorah must be the central mainstay and occupy a dominant position within the lifestyle of every Yid.
On Friday night, a large crowd of people flocked to the home of Family Moshe Vorhand, the achsania of the Rosh Yeshiva. These included several who had flown in from mainland Europe especially for the occasion in order to participate in an uplifting Oneg Shabbos. The Divrei Torah and Nigunim combined together to make an unforgettable experience that left all the participants uplifted and inspired. On Sunday, the Rosh Yeshiva visited Pardes House Grammar school.

The burgeoning Torah community of Edgware once again welcomed Harav Mordechai Yosef Karnowsky, Senior Mashgiach in the Yeshivah. During the course of a tumultuous 48 hours, the Mashgiach visited three local schools and four Shuls. He delivered the NW London Torah Way Shiur on Friday morning, and gave a Shovevim shmues in Kolel Beis Ahron. On Motzei Shabbos, he delivered a Ladies’ shiur. The Oneg Shabbos held on Friday night in the home of Mr and Mrs Moshe Sinitzky was enjoyed by all the participants. The genuine and heartfelt messages that were delivered left both Yeshivah Alumni and other mevakshei Torah uplifted and inspired.

The presence in Hendon of Harav Gershon Miller, Yeshiva Mashgiach, afforded the Yeshiva’s more recent alumni an opportunity to spend ‘quality time’ with their popular mentor. During Shabbos, Rabbi Miller davened and spoke at Hendon Adass Shul and North Hendon Adass Shul. Both communities are longstanding supporters of the Yeshiva. Shabbos morning tefilos were held in Beis Hamedrash Ohr Chodosh which counts numerous alumni amongst its membership.

On Friday night, the Oneg Shabbos was hosted by Mr & Mrs Chaim Werjuka one of the Talmidim and lasted into the night. The convivial and relaxed atmosphere combined to provide a really inspiring experience. Rabbi Miller concluded his series of public appearances by giving the NW London Torah Way Shiur on Sunday morning.

A common sentiment that was expressed by all the participants in the Shabbos programmes was their nostalgic enthusiasm they all felt towards the Yeshiva. The participants relished the opportunity to spend time once again with the Torah personalities who played a major role in their lives during their formative years in Yeshiva.